School’s Program Success, but a work in progress

SECASA’s Schools Program is designed to educate young people on important issues that relate to their bodies and their mental, physical and emotional wellbeing.

Hayley and Elizabeth run this program and visit different Primary and Secondary Schools across the South Eastern region. This program raises greater awareness on subjects such as: protective behaviours, bodily autonomy, respectful relationships and online safety.


It can often be challenging for young people to navigate the changing landscape that is the modern world and find their place in society.

To make this process more fluid, Hayley and Elizabeth channel their passion during each and every School’s Program session, to help groups of young people develop a strong sense of self during one of the most vulnerable and impressionable periods in their lives.

In light of this, the School’s Program has a uniquely tailored approach which delivers practical and relatable information to young people who need it the most.

The programs are as follows:

Hayley said that she enjoyed the Feeling Safe Together Program the most, as she loved hearing children offer their praise at the end of the session.

“I don’t want [the program] to be scary for them” she said. “So, it’s nice to hear [the students] say that was really fun, because you don’t expect that after the types of topics we are trying to address”.

Hayley also said that it was nice hearing children ask when she would be coming back again.

The Schools Program produces a quarterly report for the Department of Health and Human Services. This report highlights important information about the program’s delivery and progress. It also includes statistics, participant numbers and a general overview on the program itself.

Hayley explained that the 2017/18 financial year had been a success for the Schools Program. By the time her team had completed their report, they had visited as many schools in term two, as they were required to visit that entire year.

“We were quite shocked with that” she said.

Hayley explained that this was a first for the Schools Program and not the case in previous years. She attributed the success to her colleague Elizabeth being able to work full time hours and assist with taking on extra Primary and Secondary Schools. “It was extra man power” she said.

Hayley also acknowledged the help of some very consistent volunteers who had been extremely reliable. She mentioned it was also wonderful to have male volunteers, as they are normally “tough to source”.

Despite this Financial year being successful for the Schools Program, Hayley explained that it still needed ongoing support. “Rather than relying on support from the Department of Education, we require community assistance” she disclosed.

Like anything in life, it will be a work in progress.

We observed the Respect, Protect, Connect program being delivered

The SECASA Schools Program is designed to broaden young people's definition of violent behaviour and raise awareness about its impact on their health. After attending a session at a Secondary College in September, we were able to gain firsthand insight into the program’s value and necessity.

Within minutes of meeting specially trained Peer Educators Lizzie, Francis and Caitlin, it was apparent that they oozed passion! The workshops that they delivered were interactive, engaging and informative, and their ability to build rapport with the year 9 students was extremely impressive. Francis co-facilitated the boys program whilst Caitlin worked with the girls, and Lizzie being the program coordinator, floated between the two.

Important topics such as consent were a focal point for discussion the girls’ workshop and stereotypical portrayals of masculinity were debunked during the boys. However, many of the concepts and topics were interrelated and covered with both genders.

SECASA extends its thanks to volunteer Peer Educators Caitlin Anthony and Francis Fanchette who play an integral role in the success of the Schools Program workshops.

Reminiscing on her personal highlights during her time facilitating the Schools Program, Lizzie said that she “loved seeing a boy change his mind” and “love[d] it when she [saw] a group of young men listen to another young man challenging gender stereotypes”. 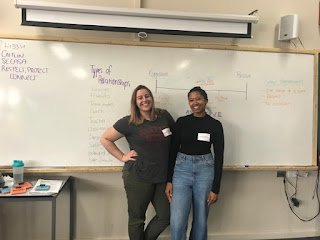 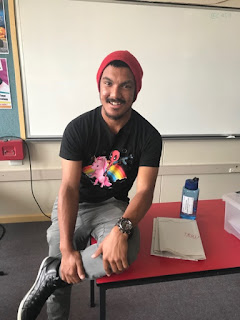 Posted by South Eastern Centre Against Sexual Assault at 08:00